An eclipse is an astronomical event that occurs when one celestial object moves into the shadow of another. When an eclipse occurs within a stellar system, such as the Solar System, it forms a type of syzygy—the alignment of three or more celestial bodies in the same gravitational system along a straight line.

For me an eclipse is the absence of an inner image with color and energy eminating from behind.

Playing with color combinations is another passion of mine. The Geo eclipse's are best viewed in a group. As your eye moves from one to another each pop in and out of focus due to color juxtapositions. In art school my pals and I called this play of color, “waka waka”.

Each composition was computer generated.

Keep in mind that each computer monitor is different, so the colors you see may not be the true drawing colors.

All of these Geo Eclipse computer generated drawings can be made into a Giclee print or a ready to hang printed canvas. 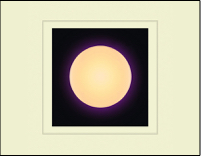