People often see hidden faces in things. Depending on the circumstances, this is referred to as pareidolia, the perception or recognition of a specific pattern or form in something essentially different. It is thus also a kind of optical illusion. When an artist notices that two different things have a similar appearance, and draws or paints a picture making this similarity evident they make images with double meanings. Many of these images are hidden faces.

These pictures of illusions  present the viewer with a mental choice of two interpretations: head or landscape, head or objects, head or architecture, etc. Both of them are valid, but the viewer sees only one of them and very often they cannot see both interpretations simultaneously. Leonardo da Vinci wrote about them in his notebook: "If you look at walls that are stained or made of different kinds of stones you can think you see in them certain picturesque views of mountains, rivers, rocks, trees, plains, broad valleys, and hills of different shapes. You can also find in them battles and rapidly moving figures, strange faces and costumes, as well as an infinite number of things." Francois and Jean Robert collected and published a lot of photos of "chance faces". There are everyday examples of hidden faces, they are "chance images" including faces in the clouds, figures of the Rorschach Test and the Man in the Moon.

These photographs were not created using a computer, they were made entirely in a traditional archival darkroom. I utilized lighting, props, multiple negatives, masks or screens plus burning and dodging techniques; whatever it took to achieve the finished print.

All of these photographs can be made into a Giclee print or a ready to hang printed canvas. 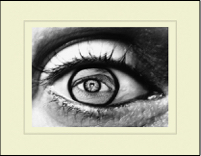